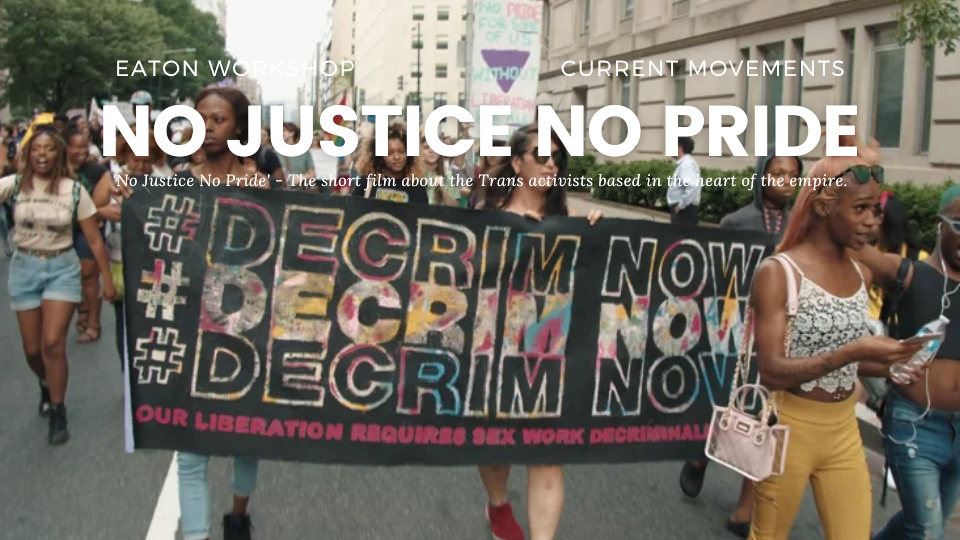 What our communities are facing -

D.C. sex workers have been approached by police asking them for sex.

In last dedcade, Trans communities receives one penny for every $100 foundations awarded

Specific to the NJNP Collective Housing -

How can housing benefit housing insecure sex workers?
Many housing insecure sex workers are more reliant on street based work which often is more unsafe. Street Based work allows you little ability to fully screen your clients, leaves you open as a target to attacks, and often forces sex workers to accept lower rates. This in combination with harassment and intimidation from police and an unsteady client stream makes it very difficult to maintain the income to sustain rent payments. Housing gives many sex workers security and safety they need and allows sex workers to negotiate better rates and screen clients in the privacy of their own homes.
What are some challenges to finding housing that accommodates the needs of a sex worker?
Many service providers stop providing services to trans folks who are over than 24, and since Black and Brown Trans sex workers often are so isolated some don't hear about these services until they are in their early 20s and they age out while waiting on a never ending voucher list. Many who are able to get these services are faced with limits such as curfews, no guest policies, cameras, and nightly bed checks. Often times Trans sex workers travel in groups and sometimes folks don't want to stay at a new place by themselves (and for good reason, we need to keep eachother safe). When we've worked with our networks on short term housing we've often tried to find spaces that would accommodate more than one person for this reason.
How can decriminalizing sex work help workers facing housing insecurity?
It would allow them to work without fear of criminalization. It would decrease stigmatization. Both criminalization and stigmatization greatly limit sex workers from seeking out resources when they are in need. It would allow sex workers more autonomy on their employment. By criminalizing sex work, the District actually makes it more difficult for sex workers and former sex workers to find alternative employment, report acts of violence, and practice safer sex.

At the NJNP Collective there is never shortage of needs to be filled. If you have any materials or supplies you can donate to the collective, it would go a long way.

Do you have an extra mattress or any bedding lying around that you would like to donate? Food, office Supplies, Beds and bedding, Meals, clothes, electronics etc. At the NJNP Collective there is never shortage of needs to be filled. If you have any materials or supplies you can donate to the collective, it would go a long way. We have a ongoing need for groceries, bedding material, office supplies – such as paper, folders, notebooks, etc – for our organizers, electronics such as printers, used and/or broken computers and cell phones. Please contact our resource manager at [email protected] to coordinate drop off. Please check below for needs directly requested by our residents and check out this page for more ways you can support us with needs, groceries, meal support and more.

***At this time, we do not have regular access to vehicals or a truck to transport large donations. We ask, whenever it's possible and accessible for you to do so to arrange transportation of donated items.

Check out our 'NJNP Needs' Page

Are you a Black Or Brown Trans Person based in DC in need of housing? Please fill our this form to get added to our current waitlest. You will receive a response within 30 days. Please note with our current capacity it may take some time. Once we have capacity, you will be contacted for an interview followed by your NJNP Agreement form.

We know that in order to center those most on the margins requires us to support each other and our communities♥, to keep one another safe, fed, and housed as we fight for a world that affirms us all, and we know that we can't do that without you!

Become a Patron!
No Justice No Pride(NJNP) is creating Trans Sanctuary at the NJNP Collective The NJNP Collective has been a vital resource to DC`s Trans and Activist Community and currently has nine long term trans tenants, many of whom lack access to stable employment and need our help in order to remain in the district near vital resources and work.  No Justice No Pride (NJNP) additionally provides temporary housing, and sometimes in rapid response situations; for 5 to 20 young trans and queer people lacking stable housing a night at the collective or throughout our local network.