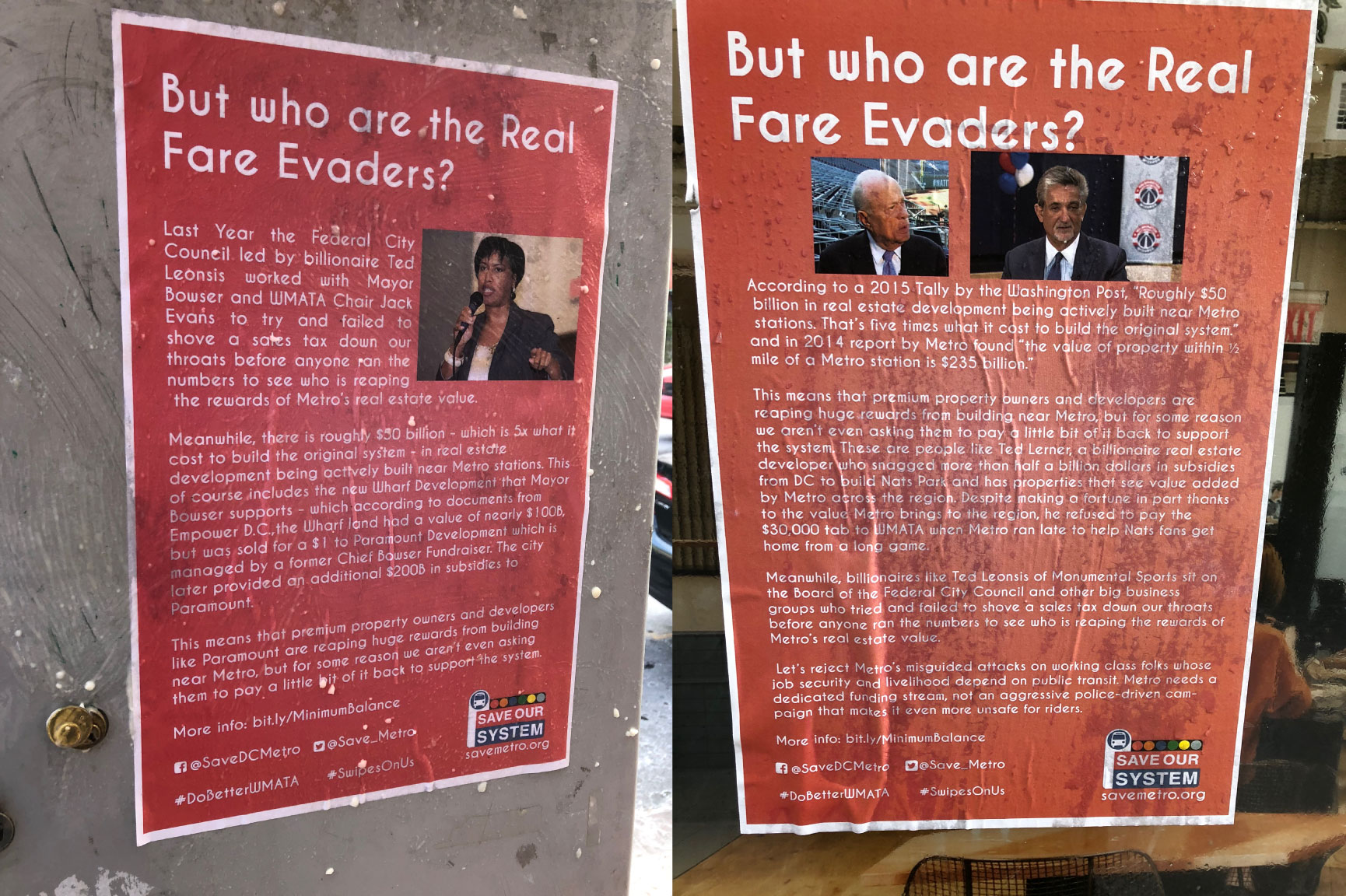 WASHINGTON, DC - The Save Our System Coalition is taking action Monday, January 8th to draw attention to the negative impact of WMATA’s decision to do away with its long-standing Minimum Balance Policy and its heightened fare enforcement activities that disproportionately target low-income communities, namely black lifelong DC residents.
The coalition, which includes local organizations No Justice No Pride, Black Lives Matter DC, Americans for Transit and Future is Feminist, will be holding a press conference and rally on Monday, January 8th at 4 PM at the Anacostia Metro Station. The group takes aim at WMATA’s decision to remove their long standing Minimum Balance Policy in an effort to regain “lost revenue.”
“WMATA’s new ‘No Negative Balance’ policy oppresses and criminalizes marginalized people. It’s now coming to a point where people have to decide if they are going to spend money on food and rent or on fare for SmartTrips,” said Dornethia Taylor, of Black Lives Matter DC and a lead organizer for the event.
“These policies only serve to make Metro more inaccessible to those who need access to public transportation most. Undermining access to public transportation will only worsen the racial and economic divides that plague our city, while distracting the public from the real fare evaders looting the system,” said Tracye Redd of Black Lives Matter DC and a lead organizer for the event.
WMATA has lost $25 million over a period of 17 years, and the system needs at least $500 million additionally a year to sustain itself. The coalition maintains that if WMATA is serious about recouping lost funds they should be focusing on developers profiting off of real estate projects around Metro stops.
“Premium property owners and developers are reaping huge rewards from building near Metro, but for some reason we aren’t even asking them to pay a little bit of it back to support the system,” said Emmelia Talarico, Senior Organizer for the Save Our System Coalition and Chair of No Justice No Pride’s Steering Committee.
“Sloppy policy changes, high fares, service cuts and other anti-rider initiatives that inevitably result in the criminalization of low income communities and targeting those who are already struggle to pay metro fares is the wrong way for WMATA to address their ongoing funding crisis,” added Talarico.
In addition, the coalition wishes to call attention to other harmful policies such as FareShare and WMATA’s heightened enforcement of fare evasion in recent months.
“Eliminating the Negative Balance policy while fare boxes and exit fare machines still only take cash is a short sighted move,” Tracye Redd added. “Metro is already targeting those who can’t pay metro fare with hundreds of dollars in fines or arrest. Now, we fear riders will literally be trapped in the system. Bus drivers will be forced to leave riders without cash behind, even if they need transportation to get to an ATM.”
“Ultimately this will increase disputes over fares, making Metro even more unsafe, especially for black and brown communities, already targeted by Metro police,” said Talarico.
“If anyone can help us get more SmartTrips to give out please donate to Paypal.me/DABLMDC,” added Dornethia Taylor, of Black Lives Matter DC.

Who: Members of the Save Our System Coalition - Americans For Transit, Black Lives Matter DC, No Justice No Pride and Future is Feminist
What:  Press Conference, Rally and Fare Card Give-Away
Where: Anacostia Metro Station - 1101 Howard Rd SE Washington, DC
When: Monday, January 8th, starting at 4PM
Timeline: Rally and Give Away starts at 4PM, Press Conference to begin at 4:30PM and Speakers to Start at 5.

Press inquiries may be directed to [email protected]